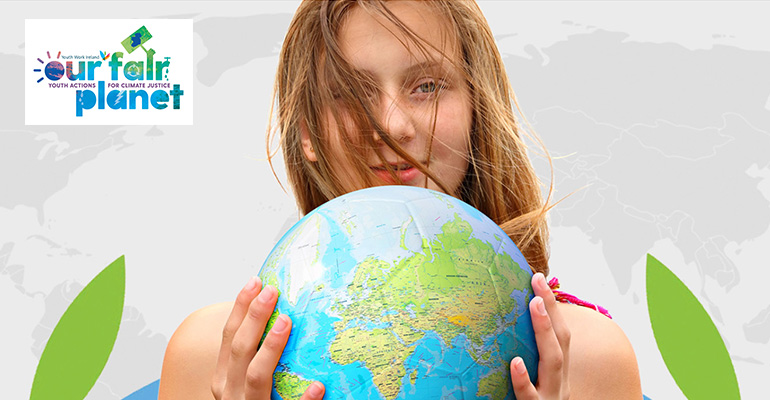 A new report from Youth Work Ireland, launched by Mary Robinson, has uncovered a range of injustices and inequalities in Ireland due to climate change. The report is part of the Our Fair Planet: Youth Actions for Climate Justice programme which aims to educate and empower young people around issues of Climate Justice.

The research is driven by young people and it found that 71% of landfill sites and waste incinerators in the country are located in areas that are below the national average of deprivation, as indicated by the Pobal HP Deprivation Index. Also highlighted is the closure of Peat fuelled power plants which has rendered entire communities unemployed, without providing alternative employment opportunities.

The report considers how communities whose livelihoods rely on climate-damaging industries are being left behind in the fight against climate change. It emphasises the need for “Just Transitions;” a concept that looks at how to support these communities as we move into more sustainable ways of living. 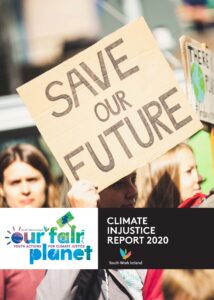 “As we come out of COVID [we must not] don’t go back to normal, normal wasn’t getting us to a safe future. We need to go back to real changes in how we run our society and that is system change. Nowadays people do recognise that young people have to be heard, but sometimes you may have to make your point more strongly. The reality of the fires in California, the flooding in Florida is all becoming hard to deny, unless you are making money out of denials”.

Small farms are especially at financial risk due to the worsening impacts of climate change. Poor weather in 2018 led to a fodder shortage which saw dairy farm incomes fall by one third. The adverse effects of extreme weather such as flooding causes damages and losses in holdings, crops, livestock and fodder.

The report emphasises the need for reducing agricultural emissions and ensuring a Just Transition for these communities, protecting the livelihoods and the way of life of rural Ireland.

“Our Fair Planet supports young people gain the knowledge and skills to carry out actions in their local communities that promote climate justice and become change makers and advocates for a fairer world,” said Deborah Fakeye, President of Youth Work Ireland. “The evidence shows that climate injustice is not an issue only happening on the other side of the world; poorer communities in Ireland are already disproportionately experiencing the effects of climate change.”

The programme commenced in September and is currently being delivered across 18 Youth Work Ireland member youth services nationally with over 350 young people participating.

“I didn’t know before how climate change could be linked to human rights. I couldn’t see the connection. I understand now, the statement that those least responsible are and will suffer the most from climate injustice,” Stephen, young participant.

“The social and environmental consequences of climate change will not be felt by today’s decision makers or by the heads of big businesses, but by future generations who will have to live with these consequences,” said Gina Halpin, Head of Information & Inclusion, Youth Work Ireland. “Our Fair Planet considers climate change from a human rights and political perspective, rather than a purely environmental issue. We can’t continue to develop policies without fully understanding how they will negatively impact communities, and we must be careful not to have a Dublin-centric view on the response to climate change. All communities that are affected by climate change policies must be consulted.”

The Our Fair Planet: Youth Actions for Climate Justice programme was developed by Youth Work Ireland and Dr Sue Redmond with funding received as part of the Department of Children, Equality, Disability, Integration and Youth Climate Justice Fund. Youth empowered actions will be showcased on a new website www.ourfairplanet.ie.