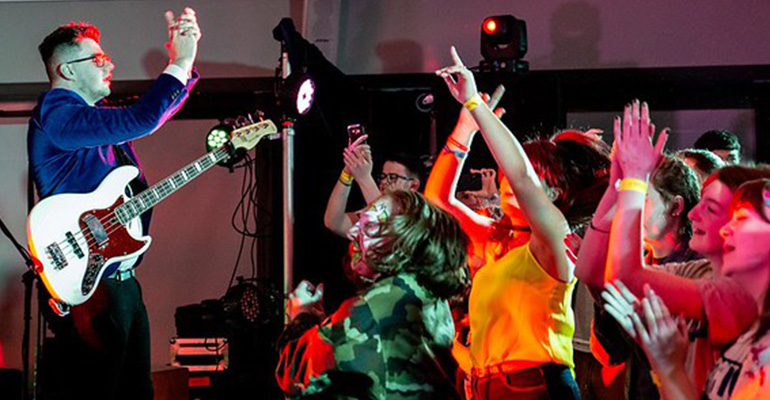 Youth Work Ireland’s Irish Youth Music Awards (IYMAs) is excited to return to Croke Park for its all-ages National Day on Saturday May 9th, 2020. Tickets are now on sale and after last year’s event nearly selling out, we advise getting your tickets quickly!

RTÉ 2FM marked this announcement live on air this morning and to celebrate this we are premiering a video featuring RTÉ Choice Music Prize Nominees Wyvern Lingo and The Academic as well as The Riptide Movement plus many more. This was shot at last years National Day in Croke Park and it will give you a snapshot of what’s on offer to those attending the all-ages event this year.

The IYMAs National Day will feature a large education hub with masterclasses and workshops from some of Ireland’s top industry professionals offering young people an opportunity to learn more about the creative industries and a chance to catch some exclusive performances. The IYMAs marketplace at the event will feature information for attendees on the creative and music industries, with BIMM Institute Dublin, IMRO and RTÉ 2FM all in attendance with the latter broadcasting live from the event. The marketplace will also have hands on demonstrations and much more.

The event also will feature performances by young musicians from across the entire island of Ireland aged 12-19, performing across two stages throughout the day, and offers ticket holders and performers access to Ireland’s top music industry personnel. The event also marks the start of Youth Work Ireland week with other events happening across the country

Tickets for the IYMAs National Day are available from Eventbrite here priced €20 excluding booking fee here. The event is an all ages, alcohol free event.

Group tickets are also available for youth clubs, projects or schools priced €120 (including booking fee) allowing admission for five young people and two youth leaders or adults on the day. Group tickets must be booked by April 22nd and are available here.

“The IYMAs National Day provides a space for young people to gain access to the music and creative industries in Ireland. It also provides an opportunity to see some great bands that would otherwise not be accessible to young people as our event is all ages. This event ultimately provides a space to have fun, learn and gain access to the creative and music industries and is open to everyone whether you are a performer or not. Over the forthcoming weeks we shall be making more announcements about some of the special guests who will appear at the event and other things we have planned for Croke Park. We recommend following the Irish Youth Music Awards social media channels to keep up to date with this news and to get a ticket quick” said Irish Youth Music Awards Director, Barry Lennon

“We are delighted to be involved with the Irish Youth Music Awards again this year and to have RTÉ 2FM doing an exclusive broadcast live from the event on the day. The IYMAs programme provides an opportunity to nurture young musicians and to offer them access to the creative and music industries and it’s great to see some of those acts now going on to be featured on our schedule through the RTÉ 2FM Rising project that we run. We are very excited to be involved as a media partner with the IYMAs programme” said Director of Music RTÉ 2FM, Alan Swan.

The overall winning region of the Irish Youth Music Awards will win recording time in a professional recording studio, a recording session in RTÉ 2FM’s legendary Studio 8 and a full backline provided by Music Maker Dublin. They will also produce an album of their own original tracks released on physical CD with a professional design. Last year’s IYMAs album stormed the Irish compilation charts entering at number five. The album will be digitally distributed worldwide through all major outlets including iTunes and Spotify.