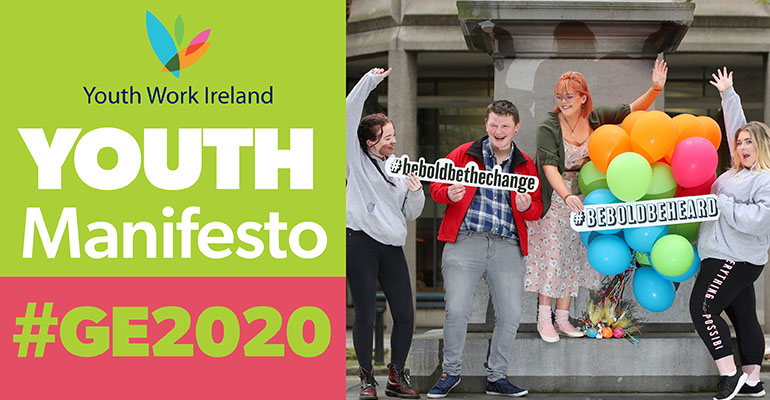 It is beyond doubt that the recent economic crisis affected massively on young people and was nothing short of cataclysmic for them. Yet in the years since the collapse of the world financial systems, we have not seen any systematic measures from Government aimed at relieving the situation for young people in Ireland. Previously NESC expressed the situation at its most basic;

“Young people are experiencing high levels of unemployment, with many of them now long-term unemployed. Unemployment among young people is particularly detrimental to the young people themselves, and to wider society, and often has long-term consequences.”

The debt and bailout of the banks and the wider economic crisis are widely accepted as impacting on us for generations. We want a say in this election, we want our voices to be heard on the issues that affect us. The amount of available resources being talked about in the election campaign can easily deliver these commitments, and we believe there is still a large amount of tax avoided and uncollected tax that could also contribute to these measures.

Young people again are the ones who will have to live with the long-term impact of climate change and the damage done to our environment. Teen activism has been front and centre in the media, but this is irrelevant if it doesn’t lead to real change. Ireland remains bottom of the class when it comes to emissions in the EU and only a radical plan can reverse this dealing with issues like transport, agri­culture and energy. The transition to a low carbon future must be a just one but it must happen.

Young people are also the ones suffering today for example in floods in towns not protected and with schools closing which have been badly planned in terms of flood defences. Young people are more open to the type of measures that will address en­vironmental challenges. We need stricter planning laws and an end to corruption locally and nationally which causes so many problems down the line in terms of the decisions made.

JOBS FOR US – NOT JOBS FOR THE BOYS!

Governments have claimed not to have cut core so­cial welfare rates for the most vulnerable, yet social welfare payments for young people were cut mas­sively over the past number of years, and the basic rate of Jobseekers allowance at €100 is recognised as being below subsistence levels. Thousands of young people who want a job, find themselves on a merry-go-round between training, education, unem­ployment and successive stints on internships. This is not good enough! Jobs for young people and pre­venting youth unemployment must genuinely be at the heart of the next Government. There should be no discrimination in the rate of the minimum wage for young people and we need a major extension in education and training places for young people if the idea of a “Youth Guarantee” is to be a reality in Ireland.

A PLACE TO GO

In hard times one of the few places young people can go that is available and free, is the youth club or project. Again, during the recession funding for these places was cut to the bone. Youth centres have closed over the last few years and a lot of youth workers are now part time. A lot of the fund­ing can only be used for work on issues like drugs and crime, even though we know giving young peo­ple options locally prevents these problems. Youth Services need to continue to be a support to young LGBTI+ young people under the LGBTI Youth Strate­gy. Similarly, we are facing a rise in youth homeless­ness and need a dedicated strategy.

The Growing Up In Ireland Survey has found ex­tremely high levels of obesity amongst young people in Ireland. There are pronounced social-class inequalities in the prevalence of overweight and obesity among nine-year-olds. These rates are high by international standards. Young people are rarely consulted about this area. We support the extension of medical cards to young people under 25 as a way of promoting preventative approaches to health­care, which will save the state in the long term. We want to see a universal system like the NHS in the UK.

The United Nations Convention on the Rights of the Child in Article 12 provides that;

“States Parties shall assure to the child who is ca­pable of forming his or her own views the right to express those views freely in all matters affecting the child, the views of the child being given due weight in accordance with the age and maturity of the child. For this purpose, the child shall in partic­ular be provided the opportunity to be heard in any judicial and administrative proceedings affecting the child, either directly, or through a representative or an appropriate body, in a manner consistent with the procedural rules of national law.”

But the reality is far different. Young people have little influence on the system, things are committed to but don’t ever happen. Other groups are in a bet­ter position to organise. Votes at 16 could open up a new participation stream linked to schools. The first should be a pilot for local and European elections. The main parties in the Seanad voted down a previ­ous proposal. This doesn’t need a referendum and can be done by the Dáil and we think it should be!

Staying in rural Ireland is becoming harder for young people. There needs to be an enhanced support package for young people to stay in farming and rural Ireland. Emigration has been a huge drain on rural Ireland but has received no political attention. Enterprise support and better facilities like Broad­band and transport are needed. We need a dedicat­ed minister for rural development.

Our schools can often resemble something from the dark ages with top down structures where young people’s voices are rarely heard. Disadvantage in education whether in boom or bust times is a deep-seated problem. Early school leaving remains an issue in many disadvantaged areas. The perfor­mance of children on key indicators under the PISA system is significantly less in DEIS schools despite some improvement. Non-attendance measured by TusLa (formerly the NEWB) is still high. Student Councils are patchy at best and young people have no involvement in the most mundane issues like school rules, books and uniform policy. Costs for secondary school are rising and rising. Our work on sexual health has illustrated the need for radical change in the curriculum here.

Student Councils need support and the example set by some schools by having young people on boards is the future, it is the only way young people can be truly involved. Too many young people still leave school early and the alternatives aren’t great. Teach­ers need to be accountable for their performance in their jobs too and the legislation is there for this!

More and more young people are going to third level, but it is being made harder and harder. Young people have to endure more broken promises on third level fees and third level is light years from the free system promised by the politicians. Loans or graduate taxes are now proposed despite the evi­dence from elsewhere that they saddle people with even more debt for life.

Young people have a unique exposure to the failings of our public transport system as they use it while many of our leaders don’t. Practically all public transport routes lead to Dublin and it is almost im­possible to make other radial journeys. We see the complete absence of public transport links between major towns such as Clonmel and Nenagh and prac­tically non-existent services from parts of Kildare to Maynooth. Fares have risen drastically, and routes have clearly been axed in the recession with the knowledge that it is the young and the old who use them most!

PrevPreviousYouthscape and the Irish Society for Autism
NextOur Generation ProjectNext